Four more years? An analysis of the German elections 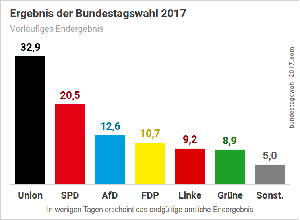 Europe’s oldest party, the Social Democrats (SPD), have imploded. Taking no more than 20% of the vote at yesterday’s elections to the Bundestag, the party of Willy Brandt and Helmut Schmidt can no longer be considered a “people's’ party that appeals to all. For more than five decades, The Christian Democrats (CDU) and SPD have been considered just this. At most elections, they have represented 30 to 40 % of the electorate and could form the government with a party of their choice. For years, both parties have contributed immensely to a stable political landscape. With both parties suffering their worst post-war results, this era of stability dominated by the SDP and CDU/CSU is now over. SPD’s political message of “More justice for all” did not resonate with the voters, or at least was not seen credible.  The fact of the matter is, that the economy is doing well, just as most Germans feel that they are doing well. Unemployment is at an all-time low and Germans have more money in their saving accounts than ever before. Today, it is other issues that worry the citizens. This is blatantly evident in the far right Alternative für Deutschland (AfD) sweeping into the German parliament as the third largest party, marking the first time in almost six decades that an openly right-wing nationalist party enters the Bundestag. Several opinion polls show that SPD has lost many of its voters to AfD. They have reservations about globalization and are scared of change. Until yesterday, Germany was one of the last countries in Europe without a far-right party in the parliament. This can of course can be explained with the country’s past, and to a lesser extent the high threshold for entry into the Bundestag. A past that many people in Germany no longer seem to have learned from. After yesterday’s elections, Germany has to adapt to this new normal. The debates in the Bundestag will change significantly. Yet, in most of the state parliaments AfD managed to enter in the past few years, they haven’t engaged in the debates very much. They rather struggled with long-standing splits inside the party often leading to their fractions falling out. And as of today this has already come to light in the former AfD party leader stepping down.

As predicted in the polls, Angela Merkel’s conservative CDU/CSU emerged as the winner taking 33% of the vote – enough to remain the strongest force in the parliament. But even they lost 8%. CSU, the Bavarian sister party of CDU suffered the most severe setback. This isn’t surprising as CDU/CSU was the only conservative party in the Bundestag during the last legislative period. In 2013, the liberal FDP had to leave the parliament and CDU/CSU grew disproportionally big. Now, FDP have made a strong comeback as an alternative for conservative voters who are unsatisfied with the grand coalition of CDU/CSU and SPD. The successful result of FDP might even pave their way into Merkel’s new government.

At around 9%, The Greens scored better than expected – even though Merkel copied some of their environmental issues and made them part of her own agenda. Many politicians have criticized her for this “issue theft” and for making The Green’s ideas her own. However, the ruffled Greens could end up as Merkel’s other new coalition partner. CDU/CSU can choose whether they build another grand coalition with a depressed SPD or they build a so-called “Jamaica coalition” with The Greens and FDP – a first in the Bundestag. Several leading politicians from The Greens have already indicated their willingness to govern together with Merkel whereas Martin Schulz, the SPD party leader and candidate for chancellor has already declared his wish to go into opposition as soon as the first projections were published.

Hence, a “Jamaica coalition” with Merkel continuing and FDP and The Greens entering the government looks like the most likely alternative right now. Merkel faces tough coalition talks, as this coalition requires all partners to bridge many differences on policy matters. Yet ultimately, they could end up in a more liberal and environmentally conscious Germany. Many of the grand coalition’s decisions would need to be rethought. For example, the grand coalition passed an extensive infrastructure plan which is recently being realized with construction sites all over the country. A Jamaica coalition might end up slowing down the infrastructure processes already planned as the smaller parties attach great importance to civic participation and environmental concerns. In the northern federal state Schleswig-Holstein, the three parties have proved that they can govern together. And the SPD? For them, going into opposition and enhancing their profile might be the wisest choice. Not only for them: Ultimately, the German democracy can only benefit from a strong and democratic opposition that is not lead by the far-right AfD.

Angela Merkel is known all over the world for her pragmatism and flexibility. It looks like these attributes are needed now more than ever before.